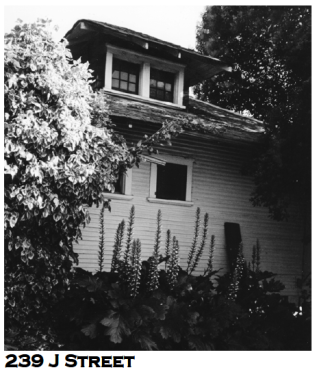 This used to be the location of a beautiful, historic bungalow home. It was razed in 1997, to make room for a set of three duplexes, one of which has been built.

What is the early history related to this house?

The house was built by Charles Porter in 1911. As told in the 1911 Davis Enterprise, “Mr and Mrs Porter . . .will return [from their honeymoon] to Davis where a handsome home has been erected by Mr. Porter” Mrs. Porter (Rose Henning), was born near Tremont but grew up in Davis. She is described in the Enterprise as being “an accomplished violinist and has devoted considerable time teaching this popular instrument.” Charles Porter is described as being a native of Michigan and “of his life previous to his arrival at Davis several years since, we are not familiar.” However, he came here well recommended in the service of the  Bay Counties Power Company. A young man of good habits and surrounded by a wide circle of admiring friends.” The Porters had two children, Charles, Jr. and Diana. Rose died in 1924, and Charles died in 1934 or 35. Charles Porter’s sisters came and stayed with Diana until she was 21.

Notable Features of the House

The one story bungalow that used to be here as described in the Davis Enterprise when it was built: “The structure is 37 feet six by 36 feet four,with a basement extending under the entire building with concrete flooring and side walls. The interior to be arranged in four rooms, hall and bathrooms. All of which will be quite spacious and comfortable. The building is to be modern in every regard and will be attractively finished inside and out, and will add to the improvement of the East side in a substantial manner.” The pictures show the northern side of the house before and after the demolition.

What has happened in recent years?

Oliver and Evelyn Luft bought the house from the Porters in 1940 or 41. They had one son, James Luft, born in 1944. They occupied the house until they died, Charles in 1965 and Evelyn in 1966, at which point James Luft moved into the house. It changed hands several more times until Mrs. Patricia Loomis bought it and had the house torn down to build three duplexes, one of which has been built.

Several older homes were torn down in order to build the University Apartments and the PG.&E. substation, both of which take up an entire block. These buildings take away from the character of the neighborhood. The character and charm of old homes can not be replaced. Save the historic homes of Old East Davis by supporting historic preservation efforts by voicing your concerns