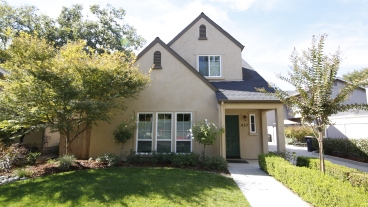 Jackson Stewart Montgomery, son of the early pioneers Alexander and Susan Montgomery, and his wife Katherine Glockler lived here after retiring from their farm.

Who were the Montgomerys?

William Montgomery (1802-1877) and his sons are the earliest American settlers in the South Putah district. After a brief but successful venture in mining, the Montgomerys found suitable land for agricultural operations in Yolo County. They
are believed to have settled early in 1851 in a triangular area (thereafter known as the “Montgomery Sink” where the original Putah Creek disappeared into the tule swamplands to the east.

Notable Features of the House

The house was built circa 1885. As one of the early homes in the city, it physically represents the type of structures, domestic
ideals and life-style of early town residents. Its vernacular style relates to the close ties that Davis had to the regional rural economy of the time, before it became predominantly identified as a University town. It is not known who built this house. From the earliest memories, it seems that it was a two unit structure.

What is the early history related to this house?

Around 1880 this property was acquired, along with several adjacent parcels, by DWC Rice, a founder of the town of Davisville. Lee Jackson Stewart and Katherine Glockler Montgomery moved to 437 J Street after retiring from their farm. Lee preceded his wife in death, Katherine died in 1948. When their son, Delbert, married Miriam in 1933, they built the house next door at 425 J
Street. The house at 421 J Street was built for Leigh Hamilton, son of Mabel, when he got married in 1937.